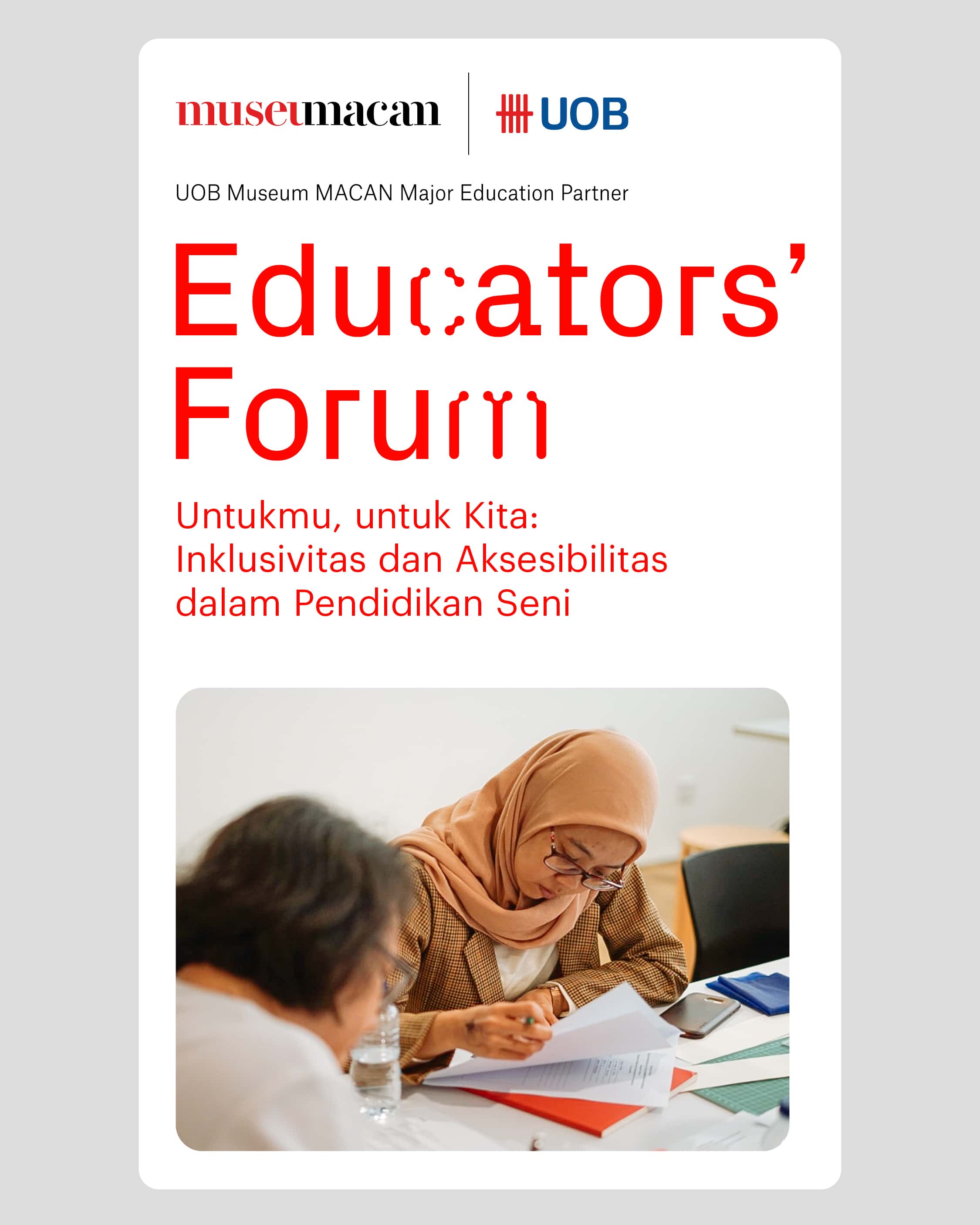 For You, For Us: Inclusivity and Accessibility in Art Education

Join us in a discussion with educators and other professionals for more inclusive and accessible art education in the future! The 8th Educators’ Forum speakers will give a short presentation and share their experience in interacting and working together with marginalized community, special-needs community, as well as the underprivileged community.

Educators' Forum is a twice-yearly gathering for art educators from all levels, and provides a platform for discussions that center on teaching art in the classroom. The focus group provides behind-the-scenes access to curators, artists, and the Museum’s collection. The gathering is free and open to educators across Jakarta and Indonesia.

Click the button below to register as Participant or scroll down to read more about the open call for Educators' Forum Presenter!

For You, For Us: Inclusivity and Accessibility in Art Education

Education for All (EFA) was globally declared during World Conference on Education for All in Thailand, in 1990. It is an international initiative to bring the benefits of education to “every citizen in every society”. Translated into Pendidikan untuk Semua, EFA has become part of Indonesian government policy. Art is often deemed to be exclusive to the people without art background. Visual art, as its name suggests, stating itself exclusive from the visually impaired community. Through arts education, we believe that arts can intentionally be inclusive and can be accessible to all, with or without special needs.

Arts education plays the role of providing knowledge, to give a better and friendlier way of understanding arts. However, reflecting on the lack of understanding, experience, manpower, facilities and resources in Indonesia, are we prepared to provide an access to inclusive art education? How each of us can contribute to prepare accessible art for all and to activate the function of art for society?

In this special edition of Educators’ Forum, Museum MACAN invites educators and other professionals for more inclusive and accessible art education in the future! The 8th Educators’ Forum speakers will give a short presentation and share their experience in interacting and working together with marginalized community, special-needs community, as well as the underprivileged community.

Lily Yulianti Farid is the founder and director of Makassar International Writers Festival and a short story writer. She published four short story collections: Makkunrai (2008), Maisaura (2008), Family Room (2011) and Ayahku Bulan, Engkau Matahari (2012). She translated Anita Roddick’s Business as Unusual into Indonesian which was published under the same title in 2013 and Linking People: Connections and Encounters Between Australians and Indonesians (2017). She holds MA (2003) and Ph.D (2015) in Gender Studies from the University of Melbourne, Australia and the winner of Alumni of The Year Award of the Faculty of Arts, The University of Melbourne in 2016 in community leader category. She is also the co-founder of Rumata’ Artspace and works as a volunteer for the cultural organisation since 2010. And in 2018, Lily received the National Cultural Award from the Government of Indonesia.

Etza graduated from Fine Arts (Intermedia), Bandung Institute of Technology and finished her Master Program in the same University in 2016. She joined Exchange Program Sound Art in HBK (Hochschule für Bildende Künste), Braunschweig, Germany. Etza’s works deals with contemporary issues and relates with urban society. By developing ideas about networking and how its problem changed the habit of humanity, her works compared to general trend and appears to be based on conceptual art, especially the combination of Sound Art, Installation, and Participatory Art.

Etza’s work not only questions the humanist side amidst technological developments, but penetrates into the exploration and experimentation on new possibilities in New Media Art as well. Therefore, she creates her art as a form of dialogue by engaging with people as the collaborator to discover her art form, as she did through a dialogue with the blind community and refugees along with other social topics of her concern. In the end, exploration of the medium is a process to seek the meaning of purity in her art form itself.

Annisa graduated from Fine Art Education Department, Universitas Negeri Jakarta in 2017. She is a teacher in SLB BCD Nusantara, Depok, Jawa Barat, and has been teaching for 3 years as homeroom and extracurricular teacher of painting and batik. She was a speaker in Forum Komunitas Guru Belajar Kediri where she speaks about her own experience as Deaf people. In 2018, she participated in an art exhibition at Festival Bebas Batas, Galeri Nasional Indonesia, Jakarta. And in 2020, she participated in an international online art exhibition Peace with Artventure Community through social media.

His work “The Family Man” was selected to be published in 1000kata.com to highlight character of men from Eastern Indonesia deemed rough and bad but taking their romantic side in the family. In 2018 he started to be mentor in Skolmus (Sekolah MUSA) until now. He then became one of the curatorial team in the public exhibition of Merekam Kota, showcasing historical photos of city of Kupang. The exhibition asked people of Kupang to provide family documentation to be reproduced and shown to public.

Click the button below if you have any questions regarding this program!