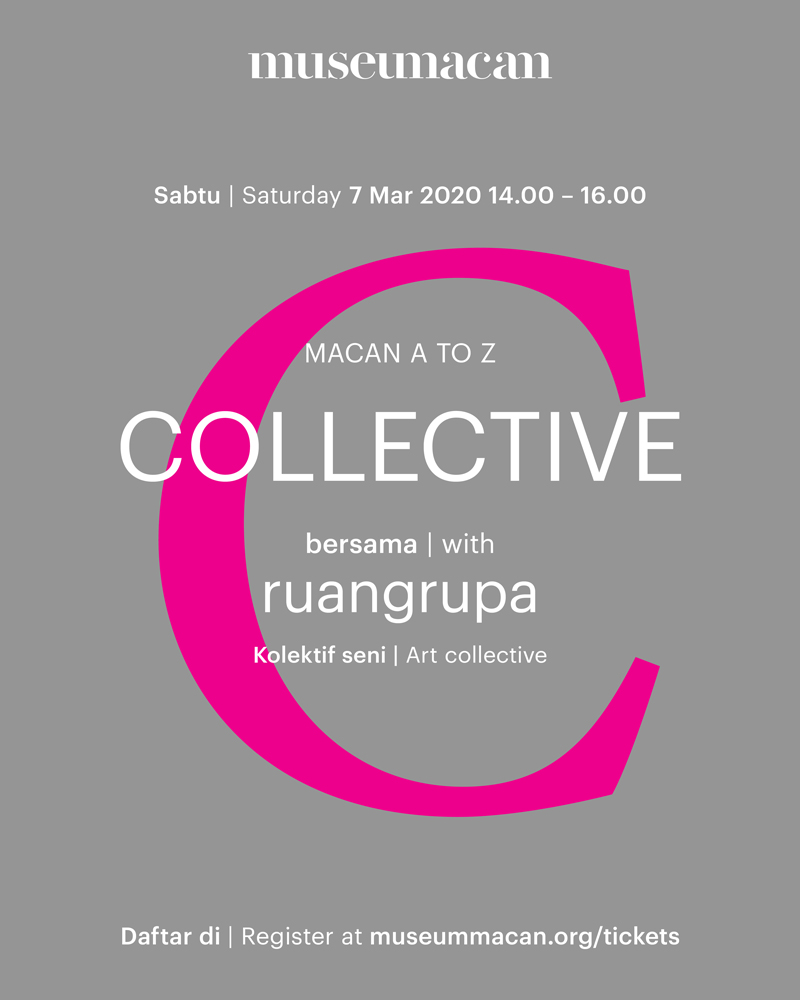 MACAN A to Z: C for Collective

Break down the world of art in 60-minute monthly talks by art professionals.

In the upcoming session of MACAN A to Z, join Ajeng Nurul Aini & Iswanto Hartono, members of ruangrupa, the Jakarta-based artist collective who has been appointed as artistic director of the forthcoming edition of documenta, a five-yearly exhibition of contemporary art in Kassel, Germany.

In this session, we will discuss the ways in which artists, commonly known to be working individually, operate together as a collective to achieve a common goal. Furthermore, the discussion will explore the role of artist collective in both the art scene and the society, through ruangrupa’s 20-year practice.

MACAN A to Z is a flagship program of Museum MACAN. In each session, we discuss an art concept with industry professionals in an hour.

ruangrupa is a Jakarta-based collective established in 2000. It is a non-profit organization that strives to support the idea of art within urban and cultural context by involving artists and other disciplines. ruangrupa also produce collaborative works in the form of art projects such as exhibition, festival, art lab, workshop, research, as well as book, magazine and online-journal publication.

In 2018, together with Serrum and Grafis Huru Hara, ruangrupa co-initiated GUDSKUL: contemporary art collective and ecosystem studies, a public learning space established to practice an expanded understanding of collective values, such as equality, sharing, solidarity, friendship and togetherness.

Ajeng Nurul Aini manages ruangrupa since 2011, while working as a project officer in various art initiatives, including Art Project for Female Visual Artists for Jakarta Arts Council. With ruangrupa, she co-curated TRANSaction: Sonsbeek 2016 in Arnhem, the Netherlands.

Iswanto Hartono is an artist, architect, curator and writer. His previous projects revolved around colonization and post-colonial debates and the battle of identity in contemporary Indonesia. Some of his latest exhibitions are Beyond Wonder: Perspective of Utopia, Tokyo Wonder Site, Nagoya (2018), DAK’ART 2018, during Dakar Biennale 2018 [Para-Site]; and a self-titled solo show, staged in Oudekerk, Amsterdam, during Europalia (2017).